The only race we lost all year was our first, against the Columbia freshmen (by about 3 feet), and we felt that was because we rowed without our strongest rower—Russ Carmody, our 6-man—who was out with the flu. (I was later told that Columbia had the third-fastest college freshman 8 that year.) Throughout the whole season we improved rapidly—we won our first meet against two high schools by about a length, but by the end of the season we beat Kent in a dual meet by 1 ½ length, won the Stotesbury by 3 lengths, and the Scholastic Championships by 4 lengths. (The New England prep school crews didn’t show up at either of the latter regattas in those days.) 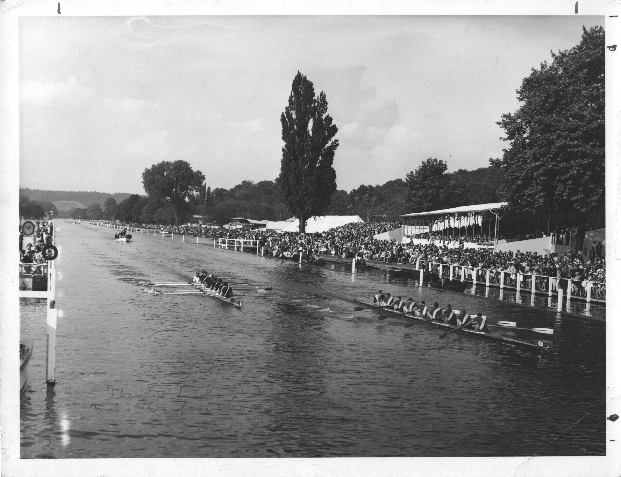 Three of the last four crews in the Princess Elizabeth Cup at Henley in 1964 were American—that was the first year the PE cup was open to international competition, and the British weren’t too happy about it. In the Semi-finals, we beat Phillips Andover (winner of the varsity 8 at the 1964 Worcester Regatta) by about a length and a half. Interesting point—in our respective semi-finals, W-L and Groton rowed identical times for the Barrier, Fawley, and Finish. This forecasted a very tough final, and nobody was disappointed in that regard.

In the final, Groton gave us a very hard time—which I thought sort of made the whole season worthwhile, since so few teams really challenged us all year. We never had more than ¾ of a length on Groton, which we held at the end of our 30-stroke racing start. (We always tried to settle from a 40-42 start to a 34 in one stroke to ensure that we were indeed rowing evenly and not “scrambled.” We thought using more than one stroke to settle (“rowing the stroke down”) encouraged scrambling and bad timing—I still think it does. The single-stroke settle enforced slide control discipline and encouraged the optimal run out of each stroke.) At about halfway through the race, we would increase our rating to 36.

Groton slowly pegged us back throughout the race, closing our advantage to about 2 seats at the mile mark, with 5/16 of a mile to go. We thought it was imperative to never let the other crew start sprinting first, so we always planned to sprint for at least the last 40 strokes.

Just past the mile mark, we went up in 3 strokes to about 40. (That was another thing—we always thought it essential for everyone in the boat to try to drive the rating up in about 3 strokes. That made for a very aggressive and furious sprint. Also, that made my job as stroke easier—that along with the fact that Carmody was an exceptionally strong and quick-catching 6-man. In later years, I was often disappointed rowing in other crews, because they were so ineffective in helping the stroke to drive up the rating. Perhaps they just weren’t that tough, or didn’t have a Carmody.)

In any case, we took the initiative in our sprint, and that moved us out 3 or 4 seats on Groton. We wound up winning by from 2/3 to ¾ of a length, after driving up the stroke to a 44.

Probably the most successful rower to graduate from that race was Groton’s Ian Gardner. In April 1965, I was stroking the Rutgers freshman 8, and the Harvard freshmen destroyed us by about 5 lengths. Ian was in the Harvard boat. I was almost in tears, having never been so badly drubbed—“building character,” as Charlie Butt would have described it. Ian came up and congratulated me on W-L’s 1964 win at Henley. (He did not intend it, but of course that made it worse.) He said, “Your coxswain [that was Lance Graham], who had a voice about 10 octaves lower than anyone in our boat, really psyched us out.” I think I feebly thanked him and congratulated him on his win of that morning, not knowing what else to say.

Ian went on to stroke the 1967 Harvard varsity, which represented the U.S. in the World Rowing Championships that year. They finished second behind New Zealand, if I’m not mistaken. I also believe that was the last time a U.S. collegiate 8 won a medal in international rowing for the United States. The 1968 Harvard Varsity (I don’t remember if Ian was still in the boat—for some reason I think he was not) represented the United States at the Olympics, but they did not win a medal (finishing 5th, I think). I think that was the last time a university team rowed as the U.S. 8 in international competition.

Many thanks to George Kirschbaum, former W-L rower and coach, for documenting W-L Crew’s rich history.

Are we missing anything? Help us fill the gaps

Get updates about our Alumni Row and other alumni events